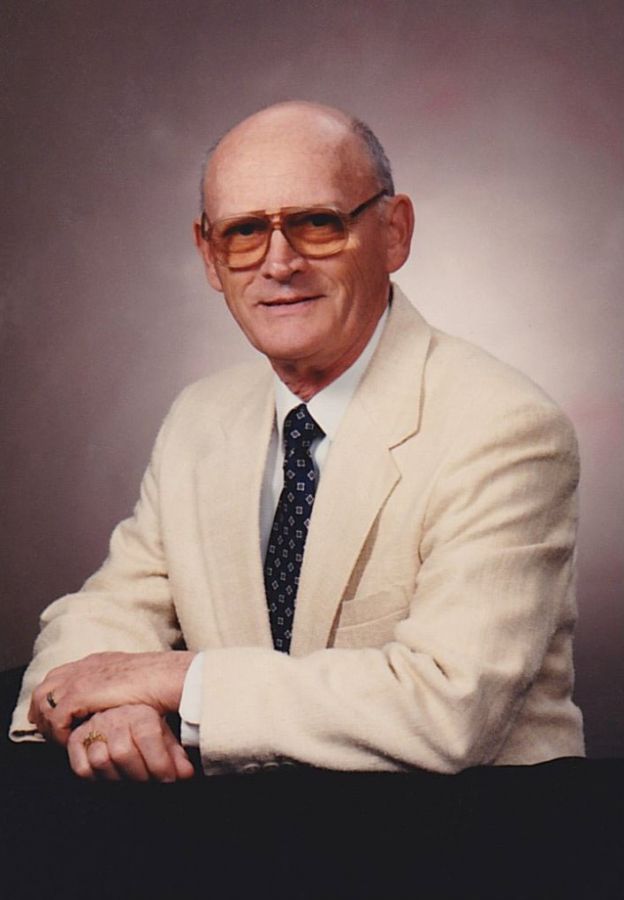 "Gene" was born on October 1, 1925, in Madison, WI to Herman Russell Chidester and Hazel Marie (Connolly) Anthony. As a boy, he enjoyed being on the Anthony farm with his grandparents in Rutland, WI, and anything mechanical. He was active in Boy Scouts, obtaining Eagle Scout distinction and later becoming a troop Scout leader. Gene was a racing enthusiast - designing, building, and racing soap box derby cars. He raced on oval dirt tracks near Sun Prairie, WI. In early adulthood, Gene was Secretary/Treasurer and then President of the Wisconsin Roadster Racing Association based in Madison.

Gene served as an Aviation Machinist Mate, 3rd Class, in the U.S. Navy from 1943 - 1945. He flew reconnaissance over the Atlantic Ocean during the war, looking for vessels from the other countries.

Gene was employed by Celon Company, Madison, WI as a mechanical engineer. During this time, he built a house in Monona Village for his family with the assistance of his father. Around 1953, Celon Corporation moved to Muscatine, IA, after which Celon was purchased by Thatcher Glass Manufacturing, a glass manufacturing company diversifying into plastics. Gene transferred to Muscatine. He retired from Thatcher Plastic Packaging and its derivatives in 1988, after holding the appointments of Chief Mechanical Engineer and Manager of the Mechanical Engineering department. He held a certificate in arc welding, and taught mechanical engineering and arc welding classes at the adult level. Eugene is credited with the following inventions and engineering patents in the plastics industry: 1) 1987 - Container with twist-off, tamper evident, feature: "...an improved plastic container with an integral sealing member extending across the outlet which must be torn away for access to the contents of the container, and therefore provides a visible indication of tampering." 2) 1974 - Linerless closure: "...a closure which will reseal the plastic container through repeated usages and one in which little deformation of the ribs is required to effect a good seal."

Gene started the entrepreneurial business ComTrac, which designed and built compact tractors and accessories for the lawn and garden industries. In the tradition of his ancestors, he loved working the land. He used his own designed and modified tractors to till his small farmland and gardens. He was an avid small acre and container farmer, growing many of the vegetables that his family consumed throughout the year.

Gene's other interests included steam locomotives, trains, automobile design, and jazz. He researched, designed, and built his own HO model railroad layout with his son, Tom. He and his wife, Jeannie, were members of Iowa Corvair Enthusiasts, and followers of the Midwest TRA Jazz circuit.

He married Bernice Elaine Young of Madison, WI in Rockford, IL in 1948, and later divorced. He married Eleanor (Mary) Jean "Jeannie" (Lowe then Woodhull then Betz) of Muscatine, IA in 1966.

Gene was very interested in genealogy and worked with his father and his wife, Jeannie, to successfully research the vast Anthony family genealogical history. He did this through manual research, without the help on online resources. He is credited with doing extensive research in 1999 with his daughter, Carol, to reunite his wife, Jeannie, and her sister Shirley Richards, after 70 years of separation due to adoption of each to separate families in different states.

Eugene was a man of integrity and loyalty. He was generous with his family and carried out focused planning to ensure affairs, events, and projects were well executed and not last minute. Practical and persistent, his decisions were well-informed through research and resourcefulness. His professional and personal endeavors proved his inventiveness, creativity, uniqueness, and ingenuity. Gene was sincere yet witty, and one could always rely on him. Even with these qualities he was self-effacing, never calling attention to himself or the exceptional abilities and talents that he possessed.

He was a member of Ss. Mary and Mathias Church, Muscatine.

Eugene is preceded in death by his parents, his wife, Jeannie Anthony in 2013, his brother, Robert Charles Anthony in 2009, and a brother-in-law, Paul Fredrick Raymond in 1974.

Cremation was carried out.

In lieu of flowers, memorials may be contributed to any of the following:

Tom, Jan & Vicki, I am so sorry to hear of your Dad/Grandfather's passing. I remember him from St Mary's. My condolences to your whole family. May he RIP.

Dear Tom and Sue, please accept my sincerest condolences and extend them to the rest of your family.
While reading your dad's obit, I saw some of the your father's traits in you,Tom. We are of an age now that has most of us as the now the senior members of our family. Hopefully we will have a few more years to gather as classmates and share our memories. Really enjoyed seeing you and Sue at Steve's.
God bless you all!

Oct
Saturday
Ralph J. Wittich-Riley-Freers Funeral Home
1931 Houser Street
Muscatine, Iowa 52761
11:00 AM
A luncheon will be provided following for all family and friends from 1 until 3 p.m. at China Garden, 2016 Cedar Plaza Drive #3 in Muscatine.
Directions  Add to Calendar

The attached photos are added to the memorial of Eugene Michael Anthony to help share their legacy.

Thank you for sharing your memory of Eugene