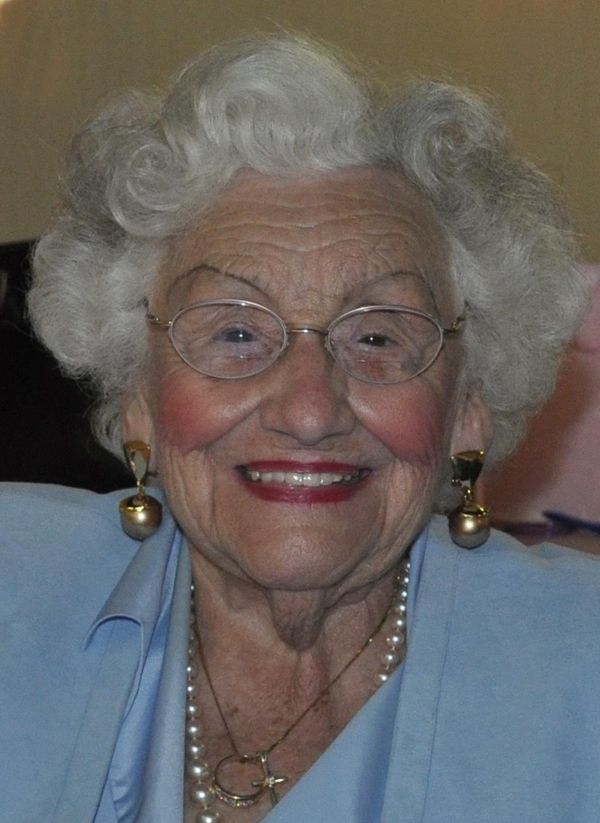 Graveside Services will be held at 11:00 a.m. on Tuesday, June 16, 2020, at Greenwood Cemetery. Reverend Steve Cauley will officiate. The Ralph J. Wittich-Riley-Freers Funeral Home will be in charge of arrangements. In lieu of flowers, family requests that memorials be made to the Muscatine County Humane Society or Salvation Army. Online condolences may be made at www.wittichfuneralhome.com.

Evelyn was born on October 31, 1919, in Muscatine, the daughter of Marguerite and Gustav Krieger. She married Marlin F. Schauland on December 12, 1943, in Muscatine.

Evelyn graduated from Muscatine Community College in 1939 and Iowa State Teachers College, now University of Northern Iowa in 1946. She was a kindergarten teacher at Jefferson Elementary School for 34 years. Evelyn became the first female Mayor of Muscatine in 1976. She served as Mayor for 3 terms (6 years).

She was proceeded in death by her spouse, Marlin F. Schauland; her daughter, Susan Schauland Johnson; her parents, Gustav and Marguerite Krieger; an infant sister; and life-long friend, Dick O'Brien.

Mrs. Schauland was my kindergarten teacher and what a wonderful smile and disposition she had. Always a favorite. When returning to Muscatine for visits, if I ever encountered her, she always remembered me. What a classy lady.

Our thoughts and prayers go out to Evelyn' s family. She was my kindergarten teacher and I remember when she played the piano in our room at Jefferson school that it was a mad rush to sit under the piano bench and pretend to play along with her. What a great smart lady !!! She will be missed. Roger and Sue McConnaha

Miss Evelyn was such a wonderful lady. When visiting my mother at the assisted living facility, she would always take my hand and want to talk. Occasionally, she would want me to walk her to her room. She always thanked me for coming as I was leaving. She will be dearly missed.

I will always remember Mrs. Schauland as my kindergarten teachers and a very close friend to me and my Parents. I will truly miss seeing her smiling face and great attitude toward life. She was a very classy lady. Rest In Peace.

We will miss Miss Evelyn. A down to earth sophisticated woman, always a lady. Many good times with her. Her influence is still strongly felt in this community. Such a friend to have. We have missed her since she moved and will more so now. Oz & Niki Malcolm

With sincere condolences to the family. Evelyn was the 1st person I met when I came to town with SunMart in 1980. I was walking in to meet my boss & as I passed her, she complimented me on my hair color. Made me smile & feel at ease on my 1st day of work in Muscatine. Throughout the years, I always spoke to her & remember how fabulous she always was. A TRUE LADY ❤ She is already greatly missed!
Suzette & Michael A. Foster

One of my grandmothers friends and my kindergarten teacher. A wonderful woman to have around. She will be missed

I will never forget this special woman. She was my kindergarten teacher and she made that scary place fun. She used to sit in a red chair like a queen! All the kids sat around her when she read a book to us. She also came to my wedding shower to say a few words about how I was in her classroom. This classy woman always looked her best!! She will be missed. Rest In Peace Evelyn.

"Miss Evie" was one of a kind from her perfectly coifed hair to her high heel shoes. She and my dad Dick O'Brien were best buddies in their later years, and spent nearly every day together "doing the town", Muscatine of course, which was dear to both of them. I often teased her about those high heeled shoes, suggesting she wear something safer for a lady of ninety-plus years. "Oh no honey, I'd surely fall without my high heels" she would say. She was special. Condolences to Tom and all the family.
Kerry Fisher (Dick O'Brien's daughter)

My sincere condolences to the Schauland family. I was priviledge enough to care for Ms Evelyn as the nursing director at Chateau Grove. She was very much a lady in all aspects of life, and a personal inspiration on how hard work and the belief that one person really can make a huge positive impact on the world. Thank you for sharing such a special lady with us, the world needs more like her.
Lou Ann Hammond

Our Prayers to Dr Tom and family. I volunteer at Chateau Grove Senior Living Center. My Mom is a resident at the center and this allowed me to meet this one in Million lady. Evelyn was a Bright light at the Center always wanting to interact with everyone. A classy, articulate and caring soul was Mayor Evie. On her 100 th birthday our local Mayor came over and Evelyn shared wisdom with him. She always had that beautiful smile that encouraged everyone. I will miss her But will meet her again in Heaven with our Savior Jesus Christ. Rick and Prema Ray, Hurricane WV

Was a very sweet woman and treated everyone like family and she always had a great and very unique smile on her face.

She will be missed by all who knew her and she definitely lived and acted like a Proverbs 31 woman who loved Jesus Christ, her family and all who she knew around her.

My thoughts and prayers are with you and your family, Tom. How lucky I was to have had her as a kindergarten teacher! She encouraged an enthusiasm for learning and propelled me toward a career in education. She will be remembered and missed.

Evelyn touched so many lives in a positive way. Her faith in Jesus Christ was evident in the way she lived and loved.

She was always so happy to see me when I came on shift at sunny brook. I loved visiting her with my little girls. She always told me how much I reminded her of her daughter. Rest in heaven sweet lady.

My thoughts and prayers are with the family,she was a very sweet lady I was a good friend of her daughter Susan. She was a true civic leader.

My prayers are with you Tom and your family, I have such fond memories or our parents get together.

Tom my prayers are with you and your family, our parents shared some very good times together, I always look back fondle of those times. Audrey Kerr Lenger

Mayor Schauland was a great lady. I met her & become friends while serving on the Muscatine Police Dept. She loved the Police officers. She lead the way in everything she did. She will be missed by everyone who knew R I P Mayor !

Mrs Schauland was my most favorite teacher ever. I have wonderful memories of her and loved school because of her. Sincerest condolences to her family. She will be greatly missed.

My sincere condolences to Evelyn's family and friends.
She will be remembered as a person revered for her guidance and inspiration. while serving in leadership roles of government, social services, and area organizations,
It was my pleasure to get to know her when I was with the chamber of commerce. God bless you Evelyn!

How I praise God for the woman Evelyn Schauland was and is because she is more alive than ever in her eternal home in heaven. As a young Pastor in 1975, I served next door to City Hall at 1st Baptist Church. With Evelyn’s prodding, we launched monthly prayer breakfasts. She helped support a Christian concert series. She co-hosted a community church wide bi-centennial celebration. She was the consummate encourager to me and I saw first hand her faith and trust in Jesus Christ as her Lord and Savior. She was a great Mayor, but to me she was an amazing teacher and friend. Her constant desire to instruct and serve from a heart of love truly reflected Christ, I’m looking forward to our reunion in glory. In Christ Alone, Pastor Bruce Huseby

The attached photos are added to the memorial of Evelyn Schauland to help share their legacy.

Please help memorize Evelyn Schauland by recording your attendance below.

Thank you for sharing your memory of Evelyn