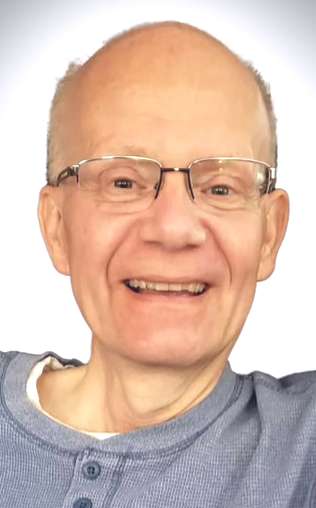 A memorial for the family will be planned at a later date. The Ralph J. Wittich-Riley-Freers Funeral Home is in charge of arrangements. Memorials may be made to Muscatine Humane Society or Peter Frampton Myositis Research Fund at John Hopkins Myositis Center Development Office. https://secure.jhu.edu/form/frampton Online condolences may be made at www.wittichfuneralhome.com.

Rick was born on February 18, 1951, in Stark County, Ohio to Robert and Vida Elizabeth (Bette) Fenwick, and was the youngest of four children: his oldest brother Bob, born June 18th, his sister Carole, born February 18th, and his best friend and brother Mike, born June 18th. Rick graduated from Timpken Vocational High School in 1969, where his focus was accounting. While in high school, he started working at Portec in Canton and earned the title of paymaster at 16 years old. He married Terrie Schmucker on March 2, 1974, in Canton, Ohio, and had a son Richard A. Fenwick Jr. Later he worked for the Hoover Company, and in 1978, Rick accepted a job with Hon Industries which brought him to Muscatine, Iowa. In 1991, through a close mutual friend, Reanee Forgey, Rick met his future bride Debbie at Muscatine Municipal Golf Course. Rick married Debbie Reynolds Tiecke on August 1, 1992. Together they raised her sons, Chad and Tyler Tiecke. Rick spent 40 years working as an engineer at various Hon plant locations, earning the respect and admiration of his colleagues and friends. Hon Company supported Rick through his diagnosis and accommodated all the stages of his disability. Rick retired proudly after four decades as a Chief Industrial Engineer, (not having a college degree) and earned the reputation of being "a Legend".

Throughout Rick's life, he enjoyed bowling, fishing, golfing, dinner with friends, playing cards, and visiting the "Investment Center" (the casino). He remained a faithful fan of the Cleveland Browns and Cleveland Indians. In recent years, he enjoyed sitting on the patio overlooking friends and family enjoying the pool and warm Iowa summers. He loved being involved with the Muscatine Firefighters MDA Annual Boot Drive. He enjoyed worshipping with Chapel of Praise, Church of God. He especially loved church suppers and when they held baptisms in his own backyard pool.

The Fenwick siblings were especially close, spending most vacation times together. They all looked forward to Thanksgiving when the entire family would gather for food and fun, playing cards and scratching lottery tickets. One of the things that kept the family close despite long distances is family football and golf pools, which Rick enjoyed organizing.

He is preceded in death by his parents, his siblings Bob and Mike.

An online visitation through Facebook was held in March, knowing that Rick was fighting the final battle relating to late stages IBM. Rick was blessed and comforted to read and listen to all the comments from family, friends, coworkers and loved ones from all portions of his life.

Deb and family,
We are so sorry to hear of Rick's passing. He fought a good fight and you fought with him every step of the way. Hugs and prayers for you as you step forward into every day.
Teresa, Jauquin and family

Rick was a very positive person and very friendly to all. I enjoyed both professional and personal interactions with him. at last the rest he so well deserves. A loss to all who knew him.

Debbie so sorry, I always enjoyed working with Rick and all our conversations throughout the years. Remember when he started at HNI and knew he was going to be one of the best engineers. He was our go to guy to calculate cost savings ideas and maybe we did not always agree but he was always right.
Will miss seeing him. Take Care Deb, you are amazing.

Besides being my cousin, I was blessed with working with Rick in the same office at the Hoover Co., where the group played Euchre at lunch. Deb, I want to thank you for tirelessly making Rick's life as comfortable as possible through his illness.

Debbie
So sorry to hear of Ricks passing. I will always remember our conversations during the time we car pooled to work solving the entire worlds problems. Also will remember the funny things that maybe I can tell you about someday.
I am glad to have known Rick and think of him as a great friend. Remember the quite street Western Ave?
God bless
Ken Meyerholz

Brian & Carrie Hetzler
Debbie and family, We were so sorry to hear the news of Richards passing… You are all in our thoughts and prayers during this difficult time. May God give you strength and comfort.

Debbie. My deepest sympathy in your loss. He was an amazing man and your love and care for him is so heart warming. May God comfort you in the days ahead. Praying for you and your family. JoDee Martin

Debbie, Chad and family. I am so sorry to read of the loss of your husband and step father. I know how highly respected he was and how much he will be missed by you and all who knew him. My heart goes out to you all. Please accept a virtual hug and love from me. I'm here if you ever want to talk Chad.

The services for Richard have not yet been added. Please sign up below to be notified when the services are ready.

The attached photos are added to the memorial of Richard A. Fenwick Sr. to help share their legacy.

Please help memorize Richard A. Fenwick Sr. by recording your attendance below.

Thank you for sharing your memory of Richard