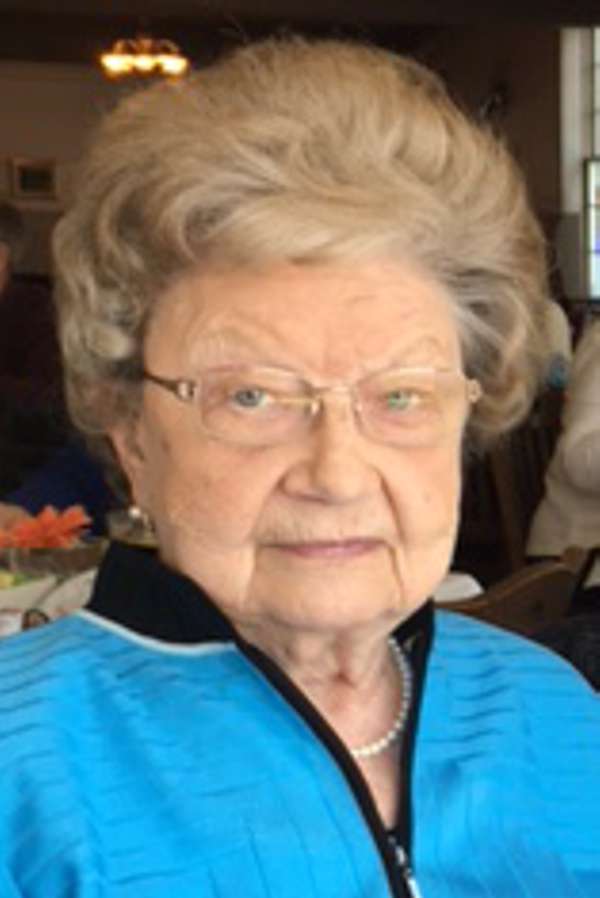 A funeral service will be at 11:00 a.m. on Tuesday, September 14, 2021, at the Ralph J. Wittich-Riley-Freers Funeral Home. Reverend Susan Bantz will officiate. Burial will be in Greenwood Cemetery. Pallbearers will be Dennis Miller, Craig Oppel, Carol Schaefer, and Jon Holthe.

Visitation is from 10:00 until 11:00 a.m. on Tuesday, September 14, 2021, at the funeral home. Memorials may be made to Trinity Muscatine Friends or P.E.O Chapter MM-OE. Online condolences may be made at www.wittichfuneralhome.com

Wilma was born on November 28, 1922, at Bellevue Hospital in Muscatine, the daughter of Guy and Jessie Swisher Mardock of Mercer County, Illinois. She spent her early childhood on the family farm in Mercer County. The family moved to Muscatine in 1929. At the age of 8 she began attending the First Baptist Church where she had perfect attendance for 11years. In 1940 she graduated from Muscatine High School.

As a MHS cheerleader she caught the eye of Clifford H. Chandler. The high school sweethearts were married on March 6, 1944, at the First Baptist Church in Muscatine. They celebrated 56 years of marriage before his passing December 19, 2000.

When their daughter Kathleen was born, she became an at home mother devoting her life to her family. She enjoyed her involvement with the activities at Lincoln School as a Brownie and Girl Scout Leader, a leader at Camp Sacagawea and as a room mother. At Central Junior High she volunteered whenever needed and she and Clifford helped chaperone the school dances. After her daughter left for college, she went back to work and retired as a first deputy in the Muscatine County Auditor's office, work she very much enjoyed.

Wilma was a lifelong member of the Muscatine Hospital Auxiliary which honored her with the Golden Auxilian Award in 1995 for her contributions to the Auxiliary. She was also a member of the Republican Women, Daughters of the American Revolution and Chapter MM-OE P.E.O.

Her favorite activities included needlework, sewing, gardening, cooking and entertaining. She stitched beautiful needlework winning blue ribbons at the Iowa State Fair and knit beautiful sweaters, mittens, and baby booties many of which were given to friends. She was happiest when she was entertaining friends and family gathered around her dining room table.


She loved to travel! She and Clifford traveled to 49 states in the United States, but always vacationed every summer in the Boundary Waters in Ely, Minnesota and Lake Namakan in Ontario, Canada. She traveled with Kathleen through England, Germany, Austria and Switzerland and to Williamsburg, Virginia for needlework seminars. In later years she cruised through the Panama Canal and the Saint Lawrence Seaway and down the East Coast with Dennis & Kathleen. Her 80th birthday was celebrated watching the Macy's Thanksgiving Parade in NY and her 90th birthday was celebrated in Williamsburg, Virginia at the Williamsburg Inn. Well into her 90s she was still celebrating holidays and birthdays at the cottage in Ephraim, Wisconsin. She will be dearly missed but she lived life to the fullest as long as she could.

Wilma is survived by her daughter, Kathleen Miller and her husband, Dennis, of Bettendorf; her step grandchildren, Joe and Denise Miller and their children Ryder Alexis and Cole of Phoenix, Arizona and Jason Miller and family of Flagstaff, Arizona.

She was preceded in death by her husband, Clifford; both of her parents; her brother Robert LaVerne Mardock; and her sister, Norma Blaesing.

Kathleen, and family, I’m so very sorry for your loss. Wilma was such a special lady. Our Mothers made Girl Scouts and school fun. Girl Scout Camp was always fun, too. She had a wonderful life, Kathleen. She will be missed. Love, prayers, and hugs to you and your family. Pam Hungate

Kathleen and family, My sincere condolences to you and your family following your mother's passing. Embrace the many wonderful memories you shared together.

Wilma and Cliff welcomed us as neighbors in 1996 and remained friends and an active part of our lives even after we both moved to other homes. "Grandma Wilma" graciously led my in-laws to Muscatine General Hospital so they could visit their brand new granddaughter, baked bunny-shaped sugar cookies and white chocolate macadamia nut cookies for us at Easter, and cheered our children on at their sporting events and other activities. When our children were younger, we often visited her at her Lutheran Homes condo after school, where she and my daughter would knit, and we always closed the visit with drumsticks, ice cream bars, or cookies, a treat which I think she enjoyed as much or more than the kids did!

We will miss her deeply but know she and Clifford are catching up in heaven. I will treasure the cookie recipe and think of her each time I make them!

Kathleen and family,
I was so saddened by the notice of your Mom's passing. She was such a sweetheart. I had no idea that she was 98 years old. She surely never looked her age. Last time I saw and visited with her was several years ago at a restaurant in Buffalo (?) on one of our trips home. We had a quick, but nice visit. It was so good to see her. She and your Daddy were very special people to me. Gramma and Grampa Chandler lived across the street from my Gramma Sander and I went to their house quite often. They were so sweet to me. I so wish I could come down to Muscatine for her service but my hubby is not always up to a trip . Please know that you and yours are in my thoughts and prayers. May your memories bring you happiness and may your faith bring you peace knowing that one day you will be together with your parents. With love and prayers, Ron and Kathleen (Barry) Marshall

Wilma and Cliff were wonderful neighbors to our daughter and family in their first home. She continued to be a surrogate grandmother and friend to our grandchildren throughout her life. What a great friend and influence she was to our grandchildren. She was a very special and gracious person.

Wilma was a beautiful and wonderful person! The staff at Oakwood feel privileged to have known her! I miss her waving to me as she walked by my desk when she was coming back from and outing and I miss talking with her for a moment when I would deliver something to her at her beautiful apartment. I wish you, Kathy and Dennis, peace as your life journey continues without her. You both will be watched over by Wilma from Heaven above and the love between you will never be gone. Prayers and love to you both.
Diana Polton

The attached photos are added to the memorial of Wilma M. Chandler to help share their legacy.

Thank you for sharing your memory of Wilma