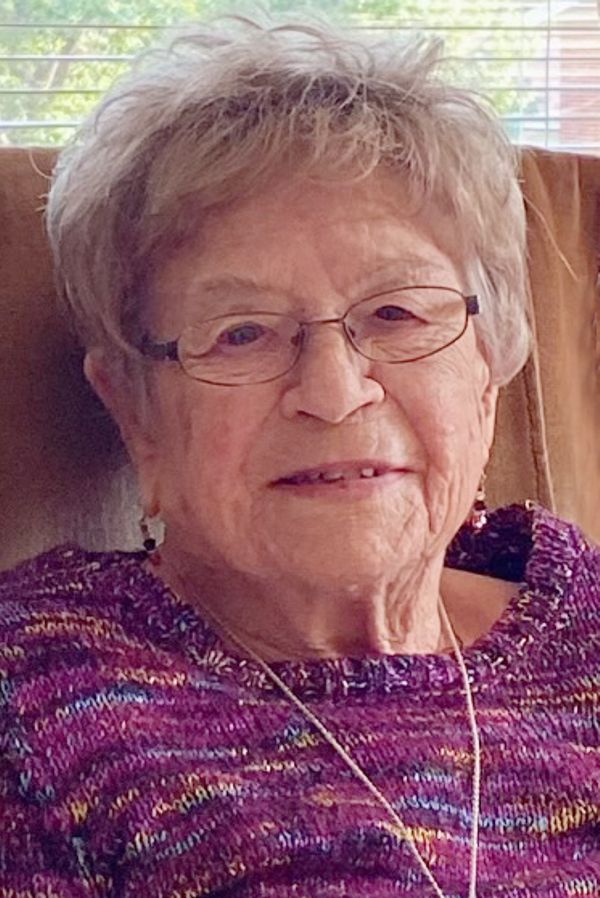 EVELYN JEWETT
MUSCATINE, Iowa - Evelyn M. Jewett, 102, of Muscatine, passed away peacefully at her home on Tuesday, August 16, 2022, with her loving family at her bedside.

A Funeral Mass will be held at 10:00 a.m. on Saturday, August 20, 2022, at St. Mathias Church. The Reverend Chris Weber and Jason Crossen will con celebrate. Burial will be in St. Mary's Cemetery.

Visitation will be held from 2:00 p.m. until 7:00 p.m. on Friday, August 19, 2022, at the Ralph J. Wittich-Riley-Freers Funeral Home. A Rosary will be held after the visitation at 7:00 p.m. at the funeral home. In lieu of flowers, the family asks that you consider making a memorial contribution to one of the following: Ss. Mary and Mathias Parish or Camp Courageous. Online condolences may be made at www.wittichfuneralhome.com.

Evelyn was born in 1920 in Sweetland Center in Muscatine County, the daughter of Albert A. and Lucille Stecher Bermel. She was raised on a farm along with her three brothers and three sisters. Evelyn learned about the good life of farming and what it meant to live off of the land.

She attended school in a one-room country schoolhouse through the eighth grade. After graduating, she moved to Pleasant Prairie to live with her grandparents on their farm to assist them in their later years.

When Evelyn was around 18-26 years old, she played the accordion in a band called; "The Melody Makers". They recorded two 78 RPM records, which are still in the family. She so much enjoyed that time of her life playing music and attending dances. Evelyn was a marvel on the dance floor too!

She married Leroy Robert Jewett on April 25, 1945, at St. Mary's Catholic Church; they remained married for 41 years until his death in 1986. They were blessed with seven daughters: Joann, Nancy, Rosemary, Barbara, Janice, Connie, and Laurie. Their daughters were raised on that Pleasant Prairie farm where she had lived with her grandparents. Evelyn was very active her entire life on the farm while raising her daughters, gardening, farming chores, dressing chickens, and all of the work that living on a farm required. In 1971, she began working in the cafeteria at the Montpelier Elementary School and remained there until the school closed 15 years later.

Evelyn was a member of several organizations including, 4-H Clubs, Catholic Daughters of America, Ss. Mary Mathias Guild, Women of the Moose, the Salvation Army, Loaves and Fishes, Trinity Muscatine Hospital Auxiliary, and the committee for the 1996 Muscatine Sesquicentennial Celebration. She also spent time at the nursing homes in Muscatine, taking part in the liturgical services and distribution of Holy Communion for the Catholic residents. Around the age of 94, she was unable to continue to do this, but she handed it over to the many who supported her in doing this every week.

She was a tremendous support to her family. Evelyn thoroughly enjoyed all of her children, grandchildren, and great-grandchildren and throughout their school years and beyond, she went to every game, play, concert, or other activity in which they were involved. They were her pride and joy!!

Kent and I wish to extend our condolences to Evelyn's family. She was a Good friend of our Mom, Leona Sissel.

So sorry we couldn't make to be with Evelyn's family, she was so joyful, full of love, made us feel special, enjoyed family pictures of her and family. Will miss her. Gene & Mary Doran

Rose, so sorry to hear of your Mom’s passing. My condolences to you and your family. Deb Daniello

A few years back Tom & I shared chapel space with Evelyn on Thursday Adoration days. . I love that lady and will pray to her not for her. RIP, Friend.
Dena Schliesman

Dear Laurie and family - sending our sympathy to you in the loss of your Mom. Reading her obituary, she lived her life filled with the adventures of a farm girl and wife and mother of an amazing home filled with girls. May your happy memories comfort you at this sad time.
Dan and Sharon Schlapkohl

We knew Evelyn for many years, my husband (Uncle Jim to Amy and Jamie) much longer than I. We didn't see Evelyn often, but whenever we did,she was unfailingly gracious and made us feel like members of her flock. We.both loved her very much and honor her for a life well lived. Our deepest sympathy to her delightful family, James and Catherine Guy

May Christi's promise of eternal life bring comfort to the entire family. We know Grandma Evelyn danced her way into heaven. Sharing our sympathy--Dyann & Dave Roby

We are so sorry to hear of Evelyn's passing. She was such a wonderful asset to our organization, so warm friendly and outgoing. Trinity Muscatine Friends

To Janice and all the Jewett sisters. I'm very happy you had your mom for so many years; now she's with your dad. I always told Jan I thought Evelyn would be with us for a long time because she was so close to the ground. I didn't get to see your mom much over the past years but did keep up with her exploits through Janice. Take care, ladies, and enjoy all the memories you're going to hear about your mom.

This is for the whole Jewett family. I never met Miss Evelyn. The only Jewetts I know are Barbara Howard and her family. Over time, I have followed Miss Evelyn's "celebrations" on Facebook and rejoiced in her life and family. Hers is a real American Midwest story of a genuine pioneer family. If it hasn't been done already, some of you should write it up in a little book and put it on Kindle. She was definitely one of a kind, a sterling example of a life well lived. We seem to be losing them too fast. Lorena French

Evelyn was such a delight to know. She always welcomed you with open arms and a big smile. She truly lived her faith and is home now

Hugs and prayer to the Jewett family! I have so many fond memories of neighborhood life near Pleasant Prairie, time with the younger Jewett girls, my mom and Evelyn working together at Montpelier School and so much more! Evelyn was a gem!

The attached photos are added to the memorial of Evelyn M. Jewett to help share their legacy.

Thank you for sharing your memory of Evelyn