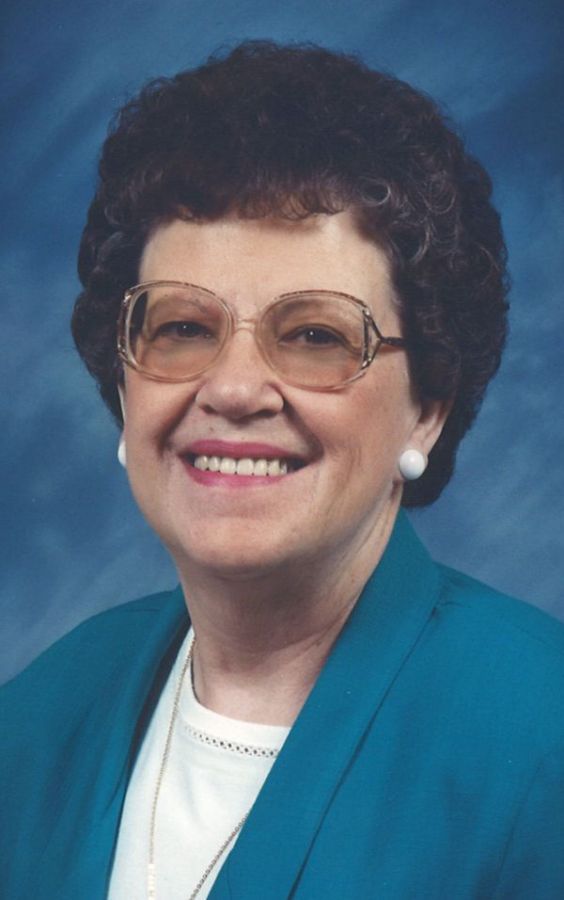 Funeral Mass will be held at 10:00 a.m. on Wednesday, November 27, 2019, at St. Mathias Church. Reverend Troy Richmond will officiate. Burial will be in Memorial Park Cemetery. Pallbearers will be George Calvelage, Brad Rowe, Greg Luken, Jerry Mathias, Bill Stickrod, Mike McGlothlen, Kevin Birkhofer, and Steve Calvelage. Honorary bearers will be Nick Birkhofer, Garry Birkhofer, Michael McGlothlen, and Scott Schaapveld. A time of food and fellowship will be at Gannon Hall following the burial.

Visitation will be held from 4 until 7 p.m. on Tuesday, November 26, 2019, at the Ralph J. Wittich-Riley-Freers Funeral Home. A rosary prayer service will start the visitation at 4 p.m. Memorials may be made to the family, in care of Linda Jones. Online condolences: www.wittichfuneralhome.com

She was a member of St. Mathias Church and Catholic Daughters of America. Shirley worked at both Jupiter and Spurgeon Stores in Muscatine as a bookkeeper.

She was a devoted wife, mother, and grandma. She did everything she could for her Grandchildren. She loved spending time with her family.

Shirley is survived by her only daughter, Linda Sue Jones and husband, Randy, of Muscatine; three grandchildren, Bradley Gerald Rowe and wife, Amanda, and their children, Madisyn, Kylie and Deegan, Ashley Crumly and husband, Gary, and their children, Riley and Carter Kaufman, and Michaela Jones and her fiancé, Becca Harden; step grandchildren, Michelle Jones and Christopher Jones and wife, Connie; two sisters Mary Schaapveld, and Kathy McGlothlen and husband, Mike; one brother, Jerry Mathias; brother-in-law, Ralph Birkhofer and wife, Lois, and Beatrice Calvelage; and many nieces and nephews that she loved very much.

MY CONDOLENCES TO MY OLD FRIEND JERRY MATHIAS. PIECE BE WITH YOU MY FRIEND.

Sorry for your loss.

Linda and family. So sorry to learn of Shirley's passing. She was a special lady. Deepest condolences.

Dear Linda and family, you are in my thoughts and prayers and have my deepest sympathy. I have many fond memories of your mom and especially remember how your mom and dad fulfilled my dad's last wishes. Take care! Cindy, Steve and family

Dear Family, you are all in my thoughts and prayers . Shirley was a very dear, sweet woman who was always very kind to our family. She reminded me so very much if dear Alice. Such wonderful memories of times together we all spent. Hugs to you Mary and Kathy❤️🙏

The attached photos are added to the memorial of Shirley Birkhofer to help share their legacy.

Please help memorize Shirley Birkhofer by recording your attendance below.

Thank you for sharing your memory of Shirley