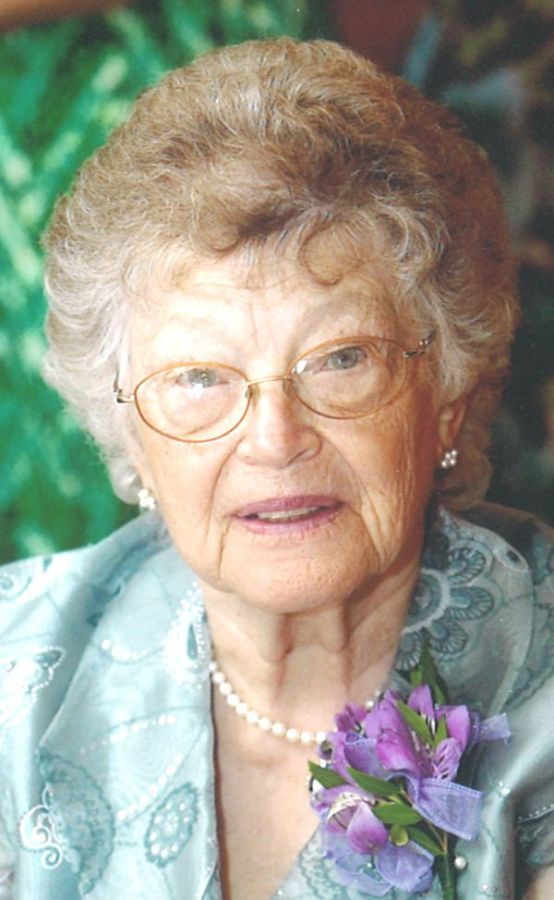 She will have a private funeral mass, rosary, and visitation at St. Mathias Church. The Reverend Chris Weber will officiate. Burial will take place in St. Mary's Cemetery. Pallbearers will be her grandchildren. The Ralph J. Wittich-Riley-Freers Funeral Home is in charge of arrangements. Condolences: www.wittichfuneralhome.com.


Marcella was born on March 10, 1923, in Muscatine, the daughter of Frank and Nellie Frankenreiter Peyerl. She married Robert Bieber on May 5, 1942, in Muscatine. He preceded her in death in 2003.

Living her whole life on apple orchards in Muscatine, Marcella worked picking and selling apples in addition to caring for her family. She also worked at McKee Button Factory and Heinz Ketchup Company.

Marcella was a member of Ss. Mary and Mathias Parish. She was an avid Chicago Cubs fan and went to her first game at 95 years of age. She enjoyed going to the casinos. She loved to play Scrabble, 500, and Farkle, and was known as 'Grandma Farkle." On special occasions she and her family would frequent the Amana Colonies to celebrate. She was known for great cooking, especially streusel apple pie. Marcella enjoyed family gatherings on the deck overlooking the apple orchard. She welcomed everyone who dropped in unexpectedly and treated them as family.

She is preceded in death by her parents; her husband, Robert; one brother, Francis Peyerl; one sister, Darlene Cooper; and two grandchildren, Chris Bennett and Eric Bieber.

Marcella's family would like to thank Megan and her staff at Sunnybrook, and Pastor Ken and the staff of Unity Point Hospice for all their support and loving care for their mother.

I am so sorry for the loss of your mother. She and your father were always very welcoming, and always treated me like one of the family. She was one of the nicest ladies I have ever met. May she rest in peace. Gary Wagner

To the Bieber Family. Sorry for the loss of Marcella. Our thoughts & prayers
go out to you at this difficult time. God Bless All of You.

So sorry for the loss of your mother Sherri! It is hard to lose a parent, a mother, no mater how long they have lived and no matter how old we are. Her memories and life lessons now live on through you and her grandchildren & great grandchild. Prayers and Hugs.

To the Bieber Family. Our sympathy and prayers go to you at this sad time. Sincerely, Tom and Mary Harper

To The Bieber Family. So sorry for your loss. Your Mom was such a beautiful lady and so kind hearted. You were all lucky to have her for so many Blessed years. Our thoughts and Prayers are with all of you. God Bless each of you and your families.
Bob and Mary Jane (Othmer) Fridley.

Craig and Michelle and Bieber family members, we are so sorry to hear about your mother's passing. You were all very blessed and she will be missed. Our thoughts and prayers are with you at this time. David & Virginia Cooper

Michelle, what a lovely Mom who lived a long and happy life. How special you had your Mom for all these years.

Craig and Michelle and all the Bieber family,
We are so sorry to hear of your Mother's passing. You have our deepest sympathy.
Roberta and Geoff Hilton

My deepest sympathies to all the family!

I am so very sorry to hear of your Mother's passing. She was a lovely lady and always welcomed me into the family. She raised a fine family of good people. I think of her often.

To Marcella’s family,
I am saddened to hear of your mother’s passing. She was a very nice lady and always made me and others feel welcome in her home. I will always remember her and some of the stories shared by Craig at the class reunion in 2018. Peace to you all.

Sherri, I am so very sorry for you loss! Marcella raised a wonderful daughter and instilled great values in you which you’re passing down to your boys. I’m thinking of you and your family, saying prayers and sending hugs!

The services for Marcella have not yet been added. Please sign up below to be notified when the services are ready.

The attached photos are added to the memorial of Marcella Caroline Bieber to help share their legacy.

Thank you for sharing your memory of Marcella