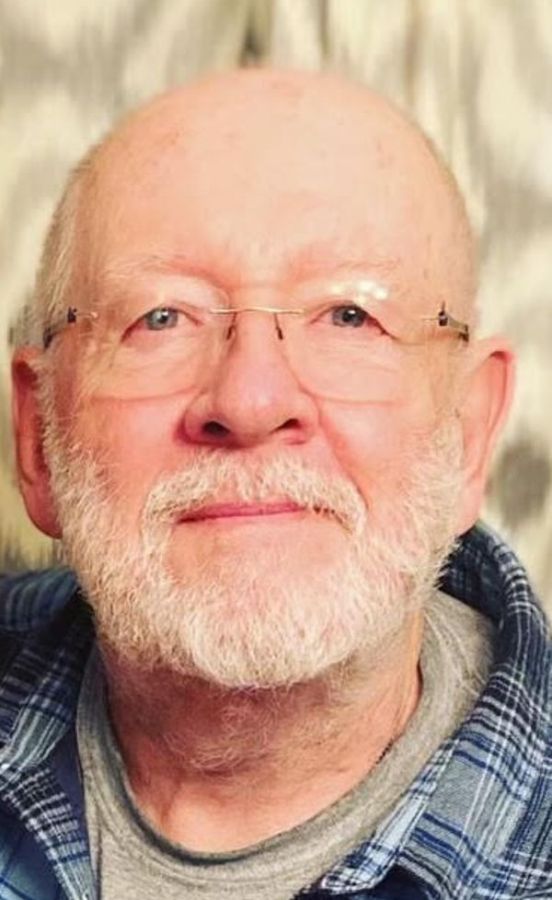 This is the obituary he had prepared for himself. However, his family would like to share a bit more about his great life.

Jim passed away surrounded by his family on July 5, 2022. He was born on September 23, 1947 in Davenport, Iowa to John and Mary Catherine White. He graduated from Davenport West High School in 1965 before joining the United States Navy in 1969 where he served as a communications technician. He spent many of his Navy years stationed in Morocco and loved sharing stories of his time there. After his release from the Navy, he attended Iowa State University and graduated in 1973 with a degree in Art and Design. Later that fall, he began his career at Kent Feeds as a Graphics Manager and retired from there in 2004.

Jim had many loves in his life. As an artist, he spent years mastering his crafts in both watercolor painting and batiks. However, his signature works were by far his handmade cards he created year after year for his loved ones. In his younger years, he enjoyed sailing the Mississippi in his boat, the Timichele, stopping along the way at the sand bars so his kids could enjoy the "beaches" as they called them. After years on the water, he traded in the boat for an MGA and spent his time restoring and cruising around town in that little red car. In 2000, he moved on to his Jeep Wrangler and joined the Jeep Club, passing on the MGA to his son, Tim. He was an avid cyclist and loved family bike rides. Even tackling RAGBRAI a few times. Jim had a great love for music, whether it was attending a live show or jamming out in his living room. His rescue animals always held a special place in the family, especially his dogs. Annie quickly became his best friend and when he lost her, Emma did her best to take her place. At the dog park in the mornings with Emma, he could be found sitting in his chair passing out treats to all the other dogs who showed up.

Above all, spending time with his family was his favorite. He married the love of his life, Brenda, June 19, 1982. From there, their his, mine and ours, "Far Side Family," spent their years traveling, listening to music, enjoying his cooking, and laughing at his crazy sense of humor. When the kids grew up, he continued his love for family time with the grandkids, whether it was at one of their many sporting events or their all-time favorite, walking on Grandpa's back.

Jim was one of a kind and will be missed by many. He is survived by his wife, Brenda; his four children, Michele Wiggins, Kenda Kistenmacher-Markel (Marty), Tim White (Andrea) and Kate Casaletto (Joe); 10 grandchildren, Connor, Cole, Corbin and Cael Wiggins, Gabby, Zoey, Irelynn, Ryker and Emmitt White and Vinny Casaletto; brother Terry White (Mary); sister Sue Vandegenachte (Bob); special niece and nephew Sarah White and John Thompson; many other cousins, friends and loved ones.

At Jim's request, there will be no funeral service. His final wish was to donate his body to the University of Iowa for research where they'll discover an Iowa State Cyclone tattoo. A celebration of life will be held from 1:00 p.m. until 4:00 p.m. on Sunday, September 25th, 2022, at the Riverview Center. Military Honors will be at 1:00 p.m. conducted by the United States Navy and the Honor Guard of Muscatine County, Inc. In lieu of flowers, please direct donations to the Muscatine Humane Society in Jim's name.

Many great memories of going to iSU football games, Bix on the river and Clear Lake. Jim will be missed by many. Condolences to Brenda and the entire family. Pete and Carole Buwalda

Jim, Frank and Ed were the three musketeers of Cory Field.

Ed (myself) was from New York, Frank from Georgia and Jim from Iowa. We all started school (Navy) in Pensacola FL at the same time. Meeting Jim was one of those things where you knew you’d hit it off immediately. We had a lot in common; humor, things we like to do in our off hours, and other interests. It was Jim who introduced me to “Blood, Sweat and tears,” who I still follow on Spotify. We spent all of our off-time together at Pensacola Beach, either at the beach, or at “Dirty Joe’s” bar, or hooking up with locals who could take us on dune-buggy rides on the dunes. Most weekends that we could get to the beach we just slept on the beach under the elevated houses (raised due to storm surges in the past). There was some drinking. Our method of transport was hitch-hiking; beach-back to base-beach. We went to school with Marines, who spent the weekends jumping through tires and climbing ropes while we got our tans, and played bumper pool, air hockey, etc at Dirty Joe’s. There were some interesting ladies, but musketeers don’t have much time for ladies.

After our school we got our orders. Frank and I went to the Aleutians--I can see Russia from my window--(Adak was known as “The Birthplace of the Winds”), and Jim went to Morocco; a desirable duty station. He loved writing to me on Adak Island, telling me what a great place Morocco was and how much fun he was having there (ball busting, to be sure).

That was back in 1969-70 as best I can recall. Jim was always in my thoughts, and when I started using Facebook to plan a family reunion, I went back onto Facebook (after the event) and plugged in "Jim White" to see if he was on Facebook. So there were billions of Facebook users, and probably thousands of Jim Whites using the app. So when I plugged in Jim White in the search field, I just scrolled down to the first one that said “location: Iowa“ and sent a quick note “were you in the Navy with Ed Connolly”?

In less than a day we were on the phone together and reminiscing like we had been apart only a year.
Then came the invite: “You guys should come and visit us up in the Adirondacks”. If this has ever happened to you, you might say “that’ll never happen.” But within about two weeks they were here; in fact Jim and Brenda made two visits. It was like we’d never been apart. We tried to locate Frank—but no luck. Lyn, my wife, and I had to work a few days, so Jim and Brenda went to Montreal on the train.

Together we had a blast, visiting Saratoga, Newport, Cape Cod (some surprises for Jim at Provincetown), Plymouth Planation (Pilgrims Landing),Vermont, West Point, Lake Placid, spending alternate days at the lake here in the Adirondacks. On our drives back from our trips we blasted blues music on the car CD player. We took a ship down the Hudson on 4th of July to watch the fireworks from the East River while enjoying a buffet and live music. WOW, did we bond! I loved Jim White, like few people I’ve ever known.

The news I got from Brenda last week was like a punch in the gut. I had just been talking about Jim the day before at a family gathering. I’ll really miss him, as I’m sure sooo many others will. There’s a hole in my heart.

Brenda—stay strong, our prayers are with you.

The tall and the sort of it

I was so heartbroken when Zac shared this news with me. I truly enjoyed getting to know him during poker season. He will definitely be missed at our house next season. We are so very sorry for your loss. He was an amazing man.

Brenda and family, we are deeply saddened to hear this news. It was a pleasure working with Jim and I enjoyed his wonderful kind demeanor and great sense of humor

Brenda, I am so very sorry for your loss. Deepest condolences to you and your family.

Jim was a great friend. We certainly had some fun times over the years. He will be greatly missed! My thoughts and prayers are with the family.

Brenda,
So sorry for your loss .

Brenda and family, we are so sorry for your loss.

So sorry for the huge loss to your family. We so enjoyed playing cards with Jim at the Boat Club! My mother June was one of Jim and Annie's biggest fans. What a tender heart and sharp wit! Hugs to you all.

So sorry for your loss Terry, brothers and sisters are your best friends.
Condolences to his family.
Linda Poage

Kenda & Brenda- Thinking of your family. You are sharing such nice pictures and memories and they are all wonderful to see. 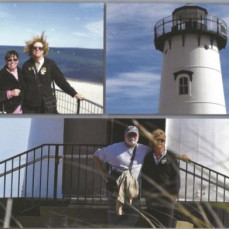 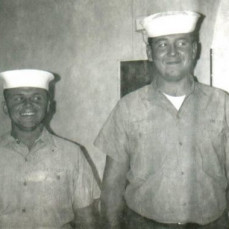 The attached photos are added to the memorial of James 'Jim' White to help share their legacy.

Thank you for sharing your memory of James