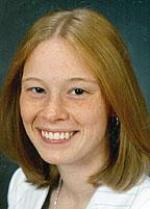 Katie Soenksen Memorial services: 10 a.m. Thursday, May 10, Our Lady of Victory Catholic Church, 4105 N. Division St., Davenport. Memorial visitation: 3-7 p.m. Wednesday, May 9, auditorium at Davenport North High School, 626 W. 53rd St., Davenport. DAVENPORT, Iowa - Pfc. Katie M. Soenksen, U.S. Army, 19, Davenport, died Wednesday, May 2, 2007, in West Baghdad, Iraq while participating with U.S. Forces in Operation Iraqi Freedom. Inurnment will be at National Cemetery, Rock Island Arsenal, with full military honors. The family suggests memorials be made to the Army Emergency Relief Organization www.aerhq.org/; North High School Activities Program; a college fund for her nieces; or to the JFK Tuition Fund. Pfc. Soenksen was born May 20, 1987, in Davenport, the daughter of Ronald L. and Mary Ann (Lovejoy) Soenksen. She was married to Specialist Benjamin Rowella, U.S. Army, Fort Hood, Texas. She attended John F. Kennedy Catholic Elementary School, Davenport, and graduated from Davenport North High School in 2005. While at North she participated in choir, softball and the ROTC Program. She enlisted in the Army immediately after graduation and was a member of the 410th Military Police Company, Fort Hood, Texas. Survivors include her husband; her parents, Ron and Mary Ann Soenksen of Davenport; a sister, Sarah Goodin and husband Eric of Blue Springs, Mo.; a brother, Matt Soenksen of Davenport; nieces, Aria Goodin, Audrienna Soenksen and Braylee Gillespie; grandmother, Erma Stephens of Bettendorf; aunts, Maureen Bergom of Bettendorf, Vicky Peterson and husband Darrell of Cedar Rapids, Beverly Babb and husband Russell of Johnston, Connie Wight of Dennison and Lt. Col. Rose Ramirez USAF and Manny Ramirez of San Antonio, Texas; uncles, Roger Lovejoy and wife Georgia of Bettendorf, Frank Lovejoy and wife Debbie of Davenport, Steve Lovejoy and wife Cindy of Bettendorf and Warren ''Tony'' Lovejoy and wife Sheila of Davenport; as well as numerous loving cousins and friends. She was preceded in death by her grandparents, Warren and Donna Lovejoy and Walter Soenksen. The family also wants to acknowledge those in her platoon who so heroically attempted to defend her life, as well as for Connor an Iraqi interpreter who sacrificed his life to help save hers.

I was one of Katie's friend's during high school and I am very hurt by what happened. I pray for her family as they go on during this hard time. May Katie rest in peace with the lord.

The services for Katie have not yet been added. Please sign up below to be notified when the services are ready.

The attached photos are added to the memorial of Katie M. Soenksen to help share their legacy.

Thank you for sharing your memory of Katie